Auto Loans Are Running on Fumes

Auto Loans Are Running on Fumes 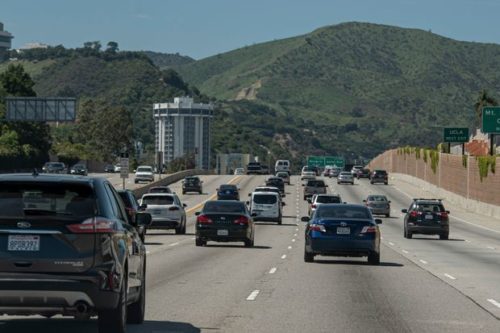 Auto loans are emerging as one the of hardest-hit categories of credit amid the coronavirus pandemic.

Auto borrowers have been big beneficiaries of lenders’ forbearance so far. At large banks and lenders, the median amount of lending in forbearance reported after the first quarter stood at 7.5% for auto loans, compared with 3.6% for credit cards, according to figures compiled by Autonomous Research.

These are early figures, representing only the initial phase of this crisis. Still, this indicator is consistent with other early signs. First-quarter delinquency rates on auto loans at big banks and lenders, defined as people at least 30 days late on a payment, jumped an average of 0.26 percentage point from a year earlier, according to figures compiled by Autonomous. By comparison, credit-card delinquencies were up just 0.07 point, Autonomous found.

Auto loans also went into this crisis already somewhat stretched. The percentage of auto-loan balances that were 90 days or more past due was 4.9% at the end of last year, according to the Federal Reserve’s Household Debt and Credit Survey. That was 38% higher than its quarterly average since 2003. All other major consumer-lending categories, apart from student loans, were below their long-term average. Auto loans also have grown as a percentage of consumers’ total debt over the past decade. 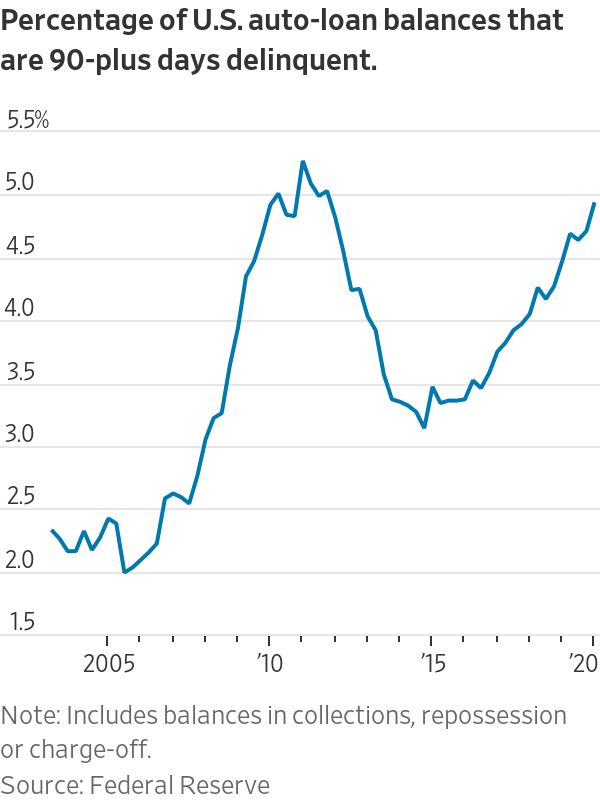 One notable emerging difference between this crisis and the financial crisis is the speed at which consumers have slashed their card borrowing. After the September 2008 financial bust, card borrowing grew another 15% until its peak in 2009. But this time around, consumer credit-card balances at U.S. banks are already down 5% from the start of the year, according to Federal Reserve data through April 15.

Capital One Financial, in a call with analysts last week, attributed its higher forbearance rate in auto lending to the size of payments being much larger than credit-card minimum payments—and therefore a bigger strain on a cash-strapped household in the short term. The bank also said that people are very motivated to seek ways to keep their cars, making them more likely to pursue forbearance for auto loans.

Auto lenders also have another unique thing to worry about in this crisis: recovery values. Though forbearance for now means there won’t be repossessions, even if a lender were to take back a car, other challenges would follow. Consumer-data collection-and-analytics firm JD Power found that in early April, used-car auctions were happening at a fraction of their normal frequency. JD Power expects prices to be down 8% to 16% through June, with the most likely scenario that by year-end, prices will be down about 4% to 6%.

The big question looming over all consumer debt is how effective stimulus checks will be in helping borrowers stay current. This week, OneMain Holdings, which makes personal loans including some to buy cars, said that while 30-to-89-day delinquencies were up 0.32 percentage point year over year in the second half of March, in April the increase slowed to about 0.15 point. OneMain attributed this to borrower-assistance programs and government stimulus checks.

OneMain shares were up about 12% on Tuesday after the report. Investors in banks and auto loans will need to see more of the same.

As plans emerge to reopen parts of the U.S. economy, a new WSJ/NBC News poll shows the majority of Americans think it will be a long time before the economy can return to normal. WSJ’s Gerald F. Seib explains. Photo: G. Ronald Lopez/ZUMA Wire

Write to Telis Demos at telis.demos@wsj.com