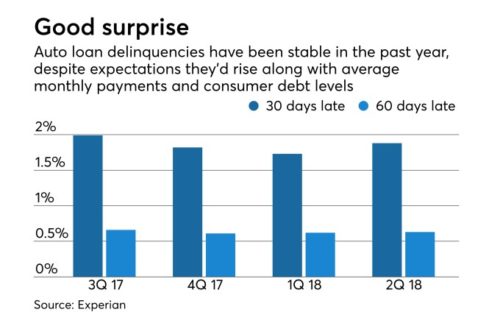 We believe the cars we offer are the highest quality

Auto lending has stabilized, but will it stick?

The nail-biting narrative in auto lending for more than two years — characterized by fears of a credit bubble and mixed statistical signals — may be shifting.

Loan delinquency levels have held steady for a year despite consumers’ lust for pricier vehicles, new data from the credit bureau Experian shows. That trend could hold, and a slump could be averted, as long as underwriting discipline stays ahead of rising auto prices and consumer debt loads, say lenders and analysts.

Quarterly financial results due in October will provide a test of this emerging thinking. Delinquency rates on banks’ auto loans might shrink in the third quarter, said Melinda Zabritski, senior director of financial solutions at Experian.

“Hopefully in the next quarter, and no more than two quarters, we’ll see those delinquencies improve,” she said.

To be sure, the auto sector has been a tough read. Consumers flocked to purchase new and used cars as labor and wage data improved, and that led to natural concerns about overheating and to scrutiny of credit terms. For every couple of banks to cut their exposure —TCF Financial in Wayzata, Minn., and Citizens Financial Group in Providence, R.I., for example — other lenders such as Ally Financial in Detroit have announced plans to expand. Wells Fargo has changed gears twice in the past two years.

From our perspective, consumers are financially healthy and market conditions are good,

The data in recent years could be read multiple ways, too. For example, both 30-day and 60-day delinquency rates on banks’ car loans and leases rose slightly from the first quarter to the second quarter.

“We are starting to see improvement, although not for everybody yet,” Zabritski said.

What encouraged Zabritski is that delinquency rates should have skyrocketed in current conditions but did not.

The average value of car loans for prime borrowers rose by $742 in the second quarter, compared to a year earlier, according to Experian. Meanwhile, consumer debt levels have reached historic highs.

Since the credit quality numbers have held steady for four quarters, that suggests consumers are able to afford higher monthly payments as expensive vehicles like SUVs have gotten more popular, said Rich Porrello, head of auto finance at the $105 billion-asset Huntington Bancshares in Columbus, Ohio.

“I don’t see it as a concern,” Porrello said, referring to the increase in average monthly payments. “It’s just a sign that new cars are getting more expensive.”

Credit risk management has had an impact. Many financial institutions have sharpened their focus on prime borrowers and have allowed loans to subprime or near-prime borrowers run off their books, Zabritski said.

“We’ve been seeing a pretty consistent trend for the past one to two years of shifting into more prime segments of the market and subprime becoming a smaller set of the industry,” she said.

Finance companies like Westlake Financial Services in Los Angeles and Credit Acceptance in Southfield, Mich., have filled the void in subprime auto loans, she said. Additionally, the online marketplace loan provider LendingClub has grown its business of refinancing auto loans.

It is an ongoing struggle for lenders to decide how much exposure to subprime or near-prime loans they should have, said Chad Shane, chief lending officer at the $2.4 billion-asset Canvas Credit Union in Lone Tree, Colo.

“The debate is always where you cut it off” in deciding how far to move down the credit scale, Shane said. After the financial crisis hit, “we got a little more conservative, and that’s probably more of the reason why delinquencies have stabilized for us.”

Canvas CU’s auto loan book rose 7% to $1.4 billion in the second quarter from a year earlier.

Even with banks trying to limit subprime exposure, there has been a persistent concern that the auto loan market is running hot, and a few banks have pulled back.

The $160 billion-asset Citizens has reduced its auto loan book 15% over the past two years, to $11.3 billion. And the $19 billion-asset TCF said in November it will stop originating auto loans due to elevated charge-offs.

The $4.9 billion-asset Fidelity Southern in Atlanta plans to decrease its indirect-auto business because of heightened competition and decline in investor demand for loan sales. Fidelity had $1.7 billion in car loans at June 30.

But others are more bullish about car lending.

Wells Fargo plans to increase its lending for cars after a recent pullback. Its auto loan portfolio shrank 21% in the second quarter compared with two years earlier to $47.3 billion. But CEO Tim Sloan said in May that the San Francisco bank will be growing the business again.

Meanwhile, the $147 billion-asset Ally has moved to consolidate its position as one of the biggest car lenders. Ally said last month that it will exit the business of lending for recreational vehicles and airplanes to focus more heavily on car loans.

In the second quarter, Ally’s consumer auto originations rose 12% to $9.6 billion. Ally forecasts that net chargeoffs of auto loans will be between 1.4% and 1.6% in the third quarter, and the bank will likely come in at the low end of that range, Doug Timmerman, president of auto finance at Ally, said in an interview.

“From our perspective, consumers are financially healthy and market conditions are good,” Timmerman said. “Most importantly, we are not seeing early-stage loan delinquencies flow to late-stage delinquencies.”

We know there isn’t much more frustrating than being without your vehicle while it gets repaired.Are you ready to give your car the service it is asking for? Schedule car maintenance or repair right here. Our top-notch service staff can get your car or truck in and out quickly.